The Henry B. Tippie National Aviation Education Center is a premier museum in dallas. Equipped with, displays a full-size replica of a North American P-51D “Mustang” painted in the colors of the famed Tuskegee Airmen. Oft-times referred to as the “Red Tails” because of the striking, red-painted tails of their fighter aircraft, the Tuskegee Airmen participated in this practice much like their fellow Army Air Force brethren. The Museum’s “Red Tail” replica is decorated in the personal markings of the late

McGee complied an additional 279 combat missions during the Korean War and the Vietnam War for a total of 409 missions, one of the highest by any United States Air Force fighter pilot. Retiring as a colonel in 1973, Charles E. McGee ended his career with 6,308 flying hours. He was honored by President Trump at the 2020 State of the Union address with a promotion to brigadier general.

General McGee was the honored speaker at the opening of the Henry B. Tippie NAEC Museum on November 11, 2021. 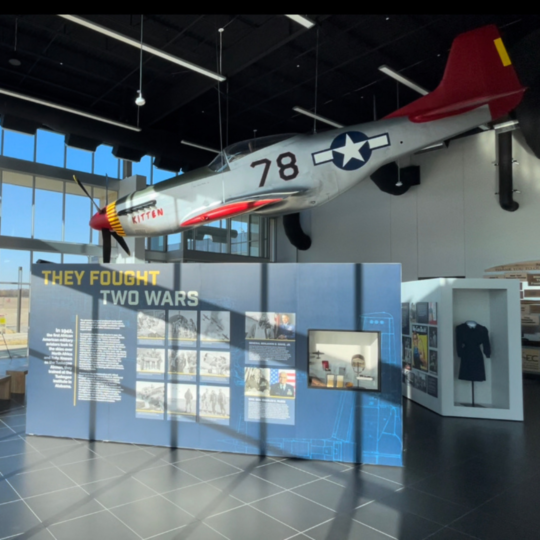 In our museum at the Henry B. Tippie National Aviation Education Center we have a model P-51 mustang on display

You can learn more about General McGee, the “Red Tails,” and military nose art in person in the Henry B. Tippie National Aviation Education Center Museum, Dallas’s premier World War II museum, Tuesday through Saturdays from 10:AM to 4:30 PM. For more information you can also visit online at www.flynaec.org.

History of the museum in dallas

Aircraft “nose art” is adorned military aircraft since World War I, but reached the zenith of its popularity during World War II, particularly on American warplanes. As an example, the American Volunteer Group (AVG), the fabled “Flying Tigers,” fought in the skies of China during the early days of US involvement in the war with Japan. The American pilots and ground crews painted a striking image of a bloody shark’s mouth on the nose of their P-40 fighter planes. The image of the “shark’s grin” was thought.

Thousands of aircraft flown by American fighter pilots chose to honor hometowns, popular songs, and even the names of sweethearts back home. Many Americans are familiar with the artwork or names of these famous warbirds including the “Memphis Belle” B-17 bomber, the B-29 Superfortress bomber “Enola Gay”, the P-51 Mustang “Old Crow”, or even the still-flying “FIFI”, one of only two airworthy B-29s still flying. The 77 year-old “FIFI” today calls the NAEC’s Victor N. Agather Hangar home during maintenance phases of her operation.

Posted in National Aviation Education Center
Manage Cookie Consent
To provide the best experiences, we use technologies like cookies to store and/or access device information. Consenting to these technologies will allow us to process data such as browsing behavior or unique IDs on this site. Not consenting or withdrawing consent, may adversely affect certain features and functions.
Manage options Manage services Manage vendors Read more about these purposes
View preferences
{title} {title} {title}